Malcolm X "The Man and His Times 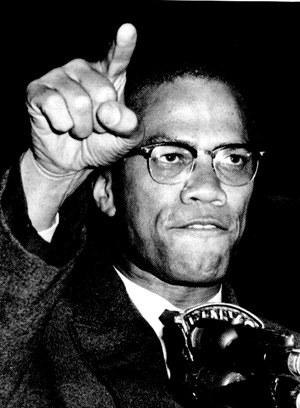 The purpose of this web page is to lead others to study and learn the truth about Omowale (the son who has come home) , the man and his times.  The best source of the truth about Malcolm is his own words which are available in selected books and video documentaries that have recorded his speeches and views.  Without a doubt, Malcolm was one of the greatest minds of the twentieth century.  Today, many speak of Malcolm, some good, some bad and most out of ignorance or reiterations from movies or from chopped and edited media presentations designed to redirect thought and behavior from the truth of the man and his times.

Some who claim him today would not be seen with him when he was alive.  Just like many today who celebrate and speak of Dr. Martin Luther King Jr., denounced him or did not support him when he was alive.  Many today who disowned  Malcolm, know little about him outside of  what others have said or what they saw in a movie or from edited television programs, media prints and sound bites.   Likewise, few would know anything about Dr. Martin Luther King Jr. beyond sound bytes from what many call the "I Hhave a Dream Speech."  I would venture to say that many who speak of Malcolm today have not even read has autobiography (as told by Malcolm to Alex Haley).   Few are aware of the fact that Malcolm was the child of active and committed parents and family members who worked towards the liberation of Africans at home and abroad.  Malcolm's wife Betty Shabazz is a descendent of Booker T. Washington.  Malcolm traveled the world and met with presidents heads of state.  Africans in America and throughout the Diaspora owe much to the life of Malcolm and his commitment to his people at home and abroad.

The following link is the introduction to the book "Malcolm X-The Man and His Times" edited by Dr. John Henrik Clarke.  Dr. Clarke was not only a friend of Malcolm, but was also one of the greatest historians of our time.  This book is recommended reading as well as other works of Dr. Clarke.  Click on the above link to view.